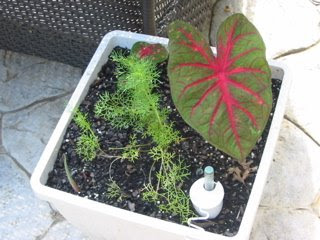 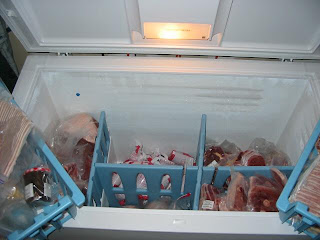 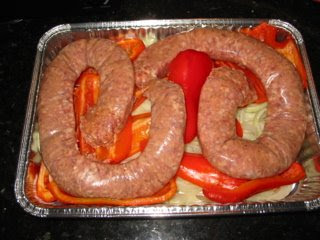 Moving from the garden to the patio, we're not leaving well enough alone and are enlisting that space to grow herbs. Basil has proved completely un-cooperative with the past eight weeks of "full week rain, then sun" cycle Maryland has received. It took about five separate plantings, but I *think* I'm getting some basil now!

In years past, Cilantro and Parsley have been difficult for me to keep past the spring. Too much sun and too high/humid temperatures mean no growth or they bolt straight to seed. This year, I'm trying to be 'clever' by planting them amongst the caladium. Once they fully leaf out they should provide enough shade and protection. Well, that's the theory anyway. As the temperatures rise I can roll them out of direct sun as well, to a shadier spot on the patio.

Speaking of rising temperatures (and terrible segues ;), this weather is great for grilling. And that's exactly what I plan to do with whatever remains of the 148 lbs. of pork still in the deep freezer. Actually, In all fairness, I'm probably down to somewhere between 80 and 100 lbs. The shoulder roasts were the first to go, we did an 8 lbs. ham for easter and ham slices throughout the spring, and we've been trying to keep on top of the pork chops and sausages. We got a bunch of those; something on the order of 15 pounds of each. So when my wife said "I've got a craving for sausage and peppers" I jumped to it; because things take a few days to defrost in the fridge and if I don't do it at that second I will forget; and then there will be no defrosted meat. This is a major drawback to buying locally raised meat in bulk; its flash frozen but if you get a craving for burgers, be prepared to wait two or three days.

Sausage and peppers are pretty much the simplest things to make. Which is why I have NO IDEA why Cooks Illustrated seems intent on adding as many extra (an IMHO superfluous) steps as possible. Take an enormous amount of onions and peppers, combine in a bowl, and microwave? Then mix mid-microwaving? C'mon! Although I should expect such things from people who insist of adding tapioca to so-called Texas Chili.

All you have to do is chop/cut what you want, layer in a 13x9 foil pan, cover with heavy duty aluminum foil; cook on the grill for 15 minutes. At this point everything is nicely steamed, and the veges have bathed in the pork and seasoning juices. Remove the sausages and peppers and grill. Keep the onions in the pan until the liquid has cooked down. Pair that with some sourdough baguette your wife just-so-happened to make for the occasion, and you've got a hearty meal!