A Toast to the Gril Roast 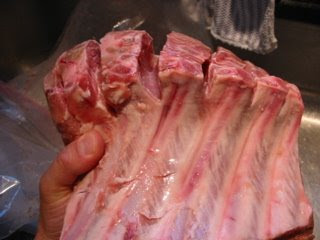 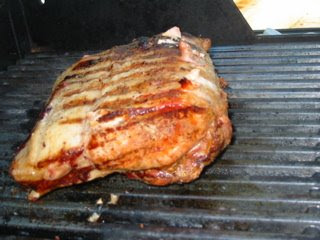 I know I said that I'd divulge the secrets of the victory garden, but this Article in todays WaPo Food section was too timely for me to pass up. As you may not know, I bought half a Berkshire pig earlier in the year from Wagon Wheel ranch. And this particular piece of meat has been a comedy of errors. Initially what I wanted was a pork loin; just the loin tied up with string. However somewhere between myself, the rancher who took my order and handed it over to the actual processing facility, what I ended up with was some bizarre, hybrid loin rack roast that had gigantic slices through the loin portion! Frankly, I think they assumed they were cutting pork chops, saw that they screwed up, and simply said "wrap it up!"

This extra surface area throws a bit of a wrench in the handling of this cut. Initially I was going to defrost it, cut the loin from the ribs myself, truss, brine for four hours, then indirect grill and smoke with chips. Given this revelation post defrosting, the entire first section (cut, truss, brine) was now out of the question. But I suppose that saved me four hours...

Instead, this joint was allowed to come to room temperature for an hour, safely within the confines of the microwave (cats and dogs still haven't figured how to open it). Then a simple rub of kosher salt, black and red pepper corns, and garlic granules was rubbed and sat in place for about forty minutes, while the wood chips soaked.

I don't know exactly how long the grilling went on for; about an hour? perhaps a bit more? Once the grill behaved and settled at just south of 250 degrees F, I mostly forgot about it.
I know the article in the WaPo whinges that opening the grill is anathema and one should get a remote probe, however my instant read meat thermometer is too good, making a second one superfluous.

All in all, this came off wonderfully. We paired it with kale and black olives and a petite syrah. (okay, the wine wasn't a perfect match, but I was too pumped about the excellent meat to care!)

Oh, and for the record, this was done on a gas grill.