Victory in the Garden 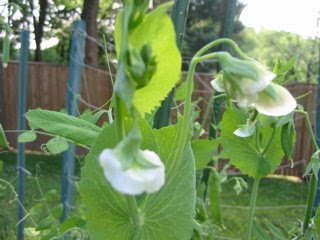 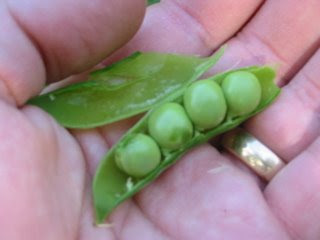 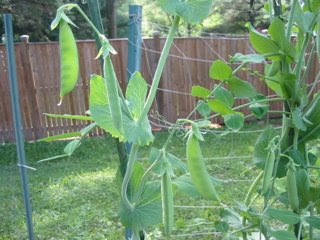 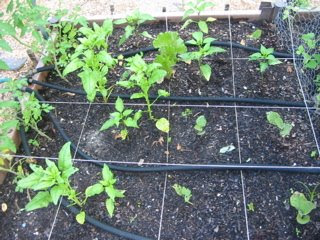 Garden Maestro Peas (second pic), your dead reckoning has come. We sort-of practice square-foot gardening which basically means intensive planting of a small amount of crops. The theory is an attempt to control your yield with a finer granularity, geared towards what you can handle.

That's the theory, anyway. While I would still recommend Mel's book, one needs to approach it with an eye of incredulity. As beautiful as this sounds: "my ideal way to water is ladling out a cup of sun-warmed water from a bucket that can be left in the sun next to your garden" (can't you hear the butterflies frolicking in the morning dew?) it is ludicrous on two fronts. Standing water? Hello mosquitoes! Also, a cup? that's it? Sorry, but the mid-July Maryland sun laughs at your feeble attempts to water and doesn't care just how many water-holding amendments you've made to your soil. Nothing short of a twenty-minute watering, three times a day via soaker hoses will do! Unless of course you'd like to tax your plants by depriving them of water and make them more susceptible to disease and insects.

Also an issue I've had is transitioning from a spring crop to a summer crop; by late May the spring vegetables are just about to yield fully, however the summer seedlings need to go into the ground at the same time. The way I've handled that in the past has been to only run the garden at half capacity; leaving squares unoccupied. This is a good plan for squares that neighbor tomatoes or squash (who grow and spread with the fierceness of a thousand suns and will choke out the light of anything around) but I'm left with the feeling that I'm doing something wrong. This isn't so much a problem with Mel's methods as it is my own inexperience. And into my fifth summer I think I've come to a solution, but more on that later. We came not to praise my methods, but to bury the Garden Maestros.

So the problem with the shelled peas is that for the space I have allocated (four one-by-one squares, eight seeds per square), thirty-two plants simply aren't enough to get a sufficient amount of mature pods at the same time. There is not enough at any given time for you to cook with them. While it certainly is nice to grab a 'snack' off the vine and eat the peas right there, if left for too long they lose their sweetness and are a bland starchy mess. Also, mysteriously, one square of eight peas did not grow at all, yet the square to the north and the square to the south had no issues.

Now, contrast that with the sugar-snaps right next to them (the other pics above). Same number of squares, same plants per square. These also suffered the misfortune of not being properly staked, so a few collapsed on themselves and broke just as they were flowering (ugh!). However I was still able to collect about twelve ounces of delicious pods, with the promise of more on the way.

Looking towards next spring, I see eight full squares of sugar-snaps. I may stagger the planting (four squares at the beginning of the season, four squares a few weeks afterwards).

/and as a note on making a graceful transition from spring crops to summer, I've started using the edges of squares, more. This allows me a little bit of space to put a seedling right in the middle of that square while the spinach or lettuce is still going. The beds are deep enough and seedling small enough that I don't think root contention is an issue. In the final picture, the second column from the right has "false alarm" not-very-hot jalapeño hybrids in the middle of spinach plants and red oak lettuce.
//Baby Girl tomatoes in the first column, third column has two false alarms on top, two fairy tale eggplants on the bottom, fourth row has another false alarm/fairytale split, fifth row shows the pea cages that protected the sugar snaps from marauding birds as seedlings.