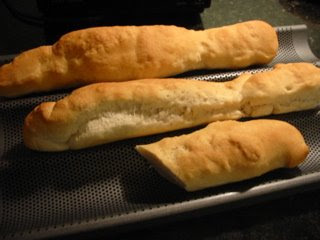 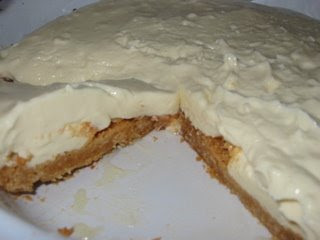 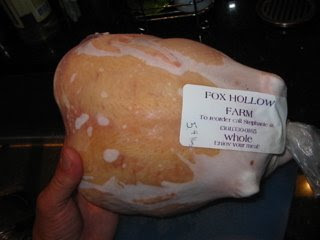 Since I forgot to add it last week, at the top of the page is the evidence of the sour dough baguettes.

We finished up the last of the Key Lime pie (mid pic); the crust was made from crushed vanilla cookies (from the store) and juiced Key limes, low fat sour cream and Neufchâtel. As you can see, we tried to lighten it up, but it was still about 440 calories for each of the ten slices. Not pictured was the sour cherry pie we made. The reason being, we didn't even have time to let it cool; we were late to get to my sisters house and despite our best efforts someone even ended up wearing some of the filling! :( I think it was still warm by the time we hit dessert. The two pieces that remained were swiftly whisked into the fridge by my sister, so no evidence of it even existing remain!

The dinner plan for tonight is beer-can chicken. We have tried to stick almost exclusively to locally raised meats from local farms, and chicken proves to be a difficult one to deal with. Most of the time, you just get a whole chicken, complete with neck. Sometimes you can get a half... but when you have recipes that call for six chicken thighs or breasts, that three whole chickens that you need to get parts from. As a result, whole chickens make it difficult to follow a recipe exactly.

The other difficulty of local chickens (at least in Maryland) is that you can't get them from November to May, unless you settles for factory farmed chickens. It's too cold out in the pastures for the broiler hens, there are no bugs for them to eat, anyway, and those who have tried to raise broilers found they spent all their time staying warm and did not put on much meat. We had five birds in the deep freeze this winter, but by late February they were all gone. April was our breaking point; we went to Whole Foods and bought chicken. Processed chicken. An entire pack of just thighs! Or just breasts! We succumbed to convenience.

My local, free-range bird dry spell has finally let up: I took delivery of five birds from Foxhollow Farm and that's what we're grilling tonight.