Check it as I freak the Gucci Technique

I first heard about this from strange corners of the internet and never forgot about it due to the boldness of the claims. But when a near and dear blog-friend brought up the same technique I had to give this a go. Turn Choice into Prime!*(of course impossible due to those being grades of fat marbling, but, nevermind) Pay for a Hyundai and get a BMW! Turn a $5 steak into a $50 steak! It was begging to be done.

Now, my meat isn't necessarily crap. The steak I started out with was a cut of top round from a free-range, locally raised angus beev. But top round isn't frequently thought of as a 'great grilling steak', more as a supporting cut that should be roasted and thinly sliced. Also I was using this in lieu of flank steak for an asian-inspired stir fry which used (amongst other vegetables) a bunch of zucchini. It wasn't going to be the star of this ensemble show, so if it became a little salty, what could go wrong?

Well, what could go wrong is that it could get a *lot* salty. A few weekends before my bro-in-law recounted a story of my sister creating salt-bomb steaks that were just inedible. Additionally I was raised to not believe everything you read on the internet ;), so copious research was necessary. If I could understand the mechanics I could potentially 'Alton Brown' my way into good foods (or eats. whatever).

Blinding Me With Science

The first point of confusion was the process. You put salt on the meat, it ionizes in any surface moisture (especially if this steak is coming up to room temperature from being in the fridge and condensation is collecting) and now the process of osmosis draws out more water from the steak.

Which is all fine and good, but we're trying to get moisture and some salt back into the steak through it's cell walls. How is that going to happen? Various spots on the internet kept claiming "osmosis draws it back in" but given the restrictive definition of "flowing from an area of low concentration to an area of high concentration" I couldn't make the math work. But that's where osmotic pressure comes in. The equation to represent this is fairly straightforward:
Π = iMRT,
Capital Pi (mmmmmm, Π!) representing the pressure, i is a dimensionless factor (so we don't care, it's just there to make the math work), R is the gas constant (again, we don't care), and what's left are M for molarity (in our case the concentration of salt), and T for temperature.

Where this gets interesting is that this gets applied to both sides of the steak membrane; creating a differential (based on amount of salt on each side and the temperature on each side). If you salt a cold steak, the outside will be saltier and gradually warmer than the inside. Thus, two factors will lead to a higher osmotic pressure outside which is how we push some of that water back in: Reverse Osmosis! This pushes the solvent (water) back in!

Further research confirmed the finding in the pages of Cooking School Secrets for Real World Cooks by Linda Carucci (with special thanks to Google Books for making page 44 available online!).

Additionally the salt denatures the proteins in the meat; this is also accomplished when you cook over heat however the proteins 'squeeze' out water. We are also pumping water back in at the same time. We should end up in juice-heaven!

Enough of this math-making, let's say we eat!

Now I was convinced with the technique, had published proof of it, and I also noted that temperature was part of the process. So I dumped about 1/2 Tbsp+ of Kosher salt on each side of this steak fresh from the fridge, left it out to come to room temperature and went and walked the dogs for a little over an hour. (*you'll note the time and amount of salt are larger than some other peoples recommendations. This is a plot point.)

A pound of this was to be thinly sliced and stir-fried; I had an extra four ounces which were sliced off and grilled separately (all meat was washed off of surface salt, first). 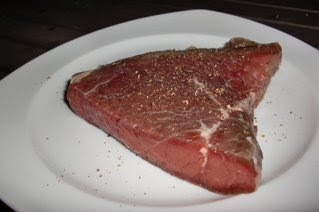 Wow! Look at those insides and that red layer! I thought "perhaps the water is bringing in oxygen and is reacting with hemoglobin" but that's too much science and we haven't even eaten yet! (as such, the subcutaneous color reaction is left as an exercise for the reader, to be graded at the end of the term. This will go down on your permanent record.) 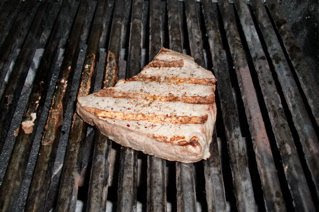 The top-round hit the grill and received what felt (to the touch) like the medium-rare treatment. And the result was... salty. Not "this is inedible" salty, but noticeably salty. I put this poor piece of meat in the fridge and furrowed my brow.

This was not going well. I had a whole pound left to cook for a stir-fry! "well, I'll slice it thin and hopefully it will hide amongst the zucchini." 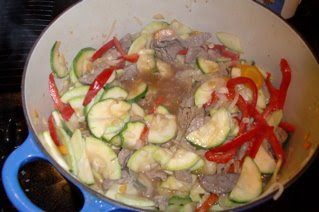 And because I have a large amount of zucchini on hand I doubled this stir-fry recipe. Now I think stir-frys are my not-so-secret weakness. From what I understand of using a wok the center cone stays very hot in order to cook things quickly and the upper sides of the wok are not nearly as hot; so you throw in the center, stir furiously to cook the surface, move ingredients up the edge (where they still cook but at a slower rate) and add in the next ingredient.

But I don't have a wok. I also have a smooth electric cook-top which prevents me from even using one. And when I saw just how many zucchini slices I had, the only recourse was a high-walled french oven. And while it's a versatile piece of cookware, it doesn't make for fast stirring. Add in very thin slices of meat that were sticking together and I admit to some clumsiness while performing the stir-fry, which would usually lead to tough meat.

But it wasn't tough. In fact, it was the best stir-fry meat I'd ever done. Even being in a sea of zucchini wasn't enough to hide that this was pretty darn tasty meat! My wife also noticed this immediately.

Why was this working? Sure, the reverse osmosis and surface denaturing keeps water in at the edge but I went and increased all the surface area a thousand-fold by slicing the beef thin! But perhaps it balanced things just enough in my favor...

Emboldened by that, the next day the steak came out of the fridge as a surprise ingredient for panini (along with asiago fresco, basil, some left-over gruyere and mayonnaise) 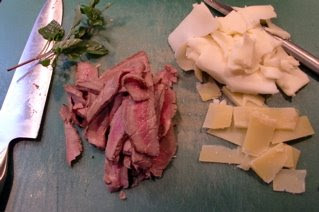 And I don't have to tell you that it came out quite delicious. I think in this application the already med-rare meat (note that bright red stripe in the above picture) stays moist and the saltiness is offset by the asiago fresco (mixing with a saltier cheese might have been disastrous...). 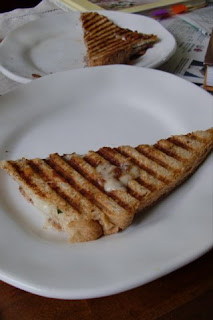 I would use this technique for a thin-sliced meat in a heartbeat, and maybe even with the same amount of salt. I'm sure I overdid it, both in time, molarity (quantity of salt), and temperature, but if you are even slightly careful you can make this work. For Porterhouse/T-Bone/NY Strip, I'll stick to the usual "salt-pepper-granulated garlic" rub fifteen minutes/half hour before grilling (which *is* this technique, just at a lesser concentration and for less time).