As the name suggests I took a wonderfully creamy chevre from Cypress Grove that is 'delicately dusted with lavender and fennel pollen' and threw it into a taco. But soft; allow me to explain!

Rick Bayless has a version of this recipe in his Mexican Everyday book (major difference, in The Everyday Book he recommends using bacon grease to cook with) and it's like the Mr. Potato Head of meals. Don't have Chard? Kale, Collards or Spinach will do! Don't have bacon grease/vegetarian? Use some kind of oil. No chicken broth on hand? Use vegetable broth or just water. No Queso Fresco? Shoot, use any fresh cheese that melts well to decently-well and has some kind of tang to it (salt, or otherwise). Shoot, I've even used ricotta (mixed with a very litttle bit of goat chevre) and it works great! And in lieu of salsa I just hit mine with a few drops of Cholula. And it's a satisfying meal. Oh, and it's quick to make on a week night. THIS RECIPE CANNOT BE STOPPED.

I made this recipe once with a very very mild local chevre and I have to say... I was disappointed. But then again, I have the palate of a gourmand and if flavors are too delicate they can get lost on me. So I think you can see where I'm going with this.

The Cypress Grove purple haze is dynamite. It absolutely explodes with intention and doesn't even need a cracker. Could it compete?

We started with some Chard from the back yard 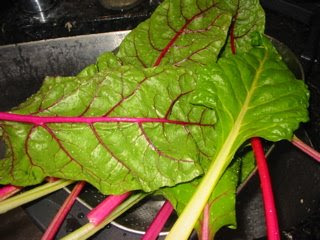 Cooked some onion in bacon fat (I think those are garlic scapes in there, too!) 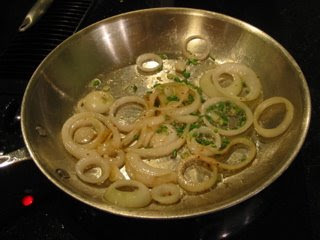 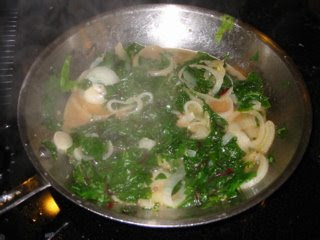 covered, and wilted for a few minutes, and then we get to the cheese. As a precaution, I had some cotija (a fine fresh cheese with a good melting character and a bit of salt to the taste) for the second taco in case the first didn't work out 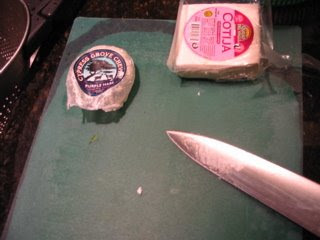 And then they were assembled 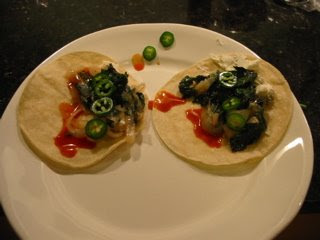 Oh yeah, I added a few jalapenos. Just because. And even with all that flavor and heat, all those strong components, this cheese not only stood up but blew the doors off. If I had this in a restaurant (You know, if I *went* to restaurants anymore!) it would have been a revelation.

In conclusion: those fancy cheeses that have depth, character, and second/third/fourth order flavors to them? They bring their magic to the other foods they touch, too! Get brave, and get mixing!