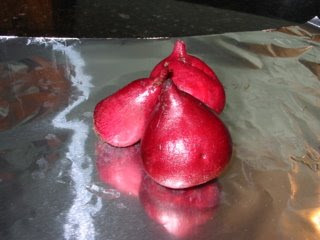 One thing I've neglected to mention over the past few weeks is the status of my CSA share. We've actually done a really stellar job of keeping up with the incoming vegetables. The only problems we've had have been cucumbers. We had a plan for them (pickles) but they went soft too quickly.

The grand majority of the vegetables are pretty easy to deal with but beets tend to be one tough nut to crack. Even stewing in South Asian spices (a la Madhur Jaffrey) still leaves me wanting (but if you have success with the linked recipe, let me know!).

My wife came up with the plan to use them to make pasta. Seems like a great idea! In the past when we've made lemon pasta or pumpkin pasta we've noted that there isn't a very strong flavor imbued by the new component but it frequently gives you a great color. Then you can use it as you would any regular , fresh pasta. 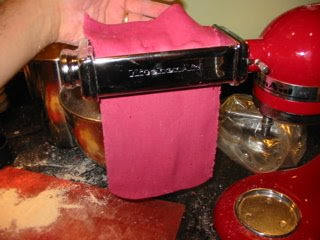 However here's where the caveat comes into play. Some people have a sense of dough (like Smilla has a sense of snow) but I am not one of these people. It's been at least five months since I'd last made pasta. Also, new additives to a basic pasta recipe (semolina flour, egg, water?) throw off your moisture profile and it's up to you to put the balance back in favor. But if you don't have a sense of dough and you've haven't made it recently...

It doesn't mean things will lead to disaster. But it does mean you will think "This sheet of dough is fine!" when in reality it will be a tacky mess once you extrude/cut some fettucine and desperately try to peel the strands apart.

Also, making a gigantic batch 'seems' like a really good idea (especially if your earlier efforts aren't going to have the right moisture balance) but it is a very easy way to get burnt out on making pasta. Thus, you don't make it for five months. And forget how the dough should feel. And enter back into the vicious cycle again! 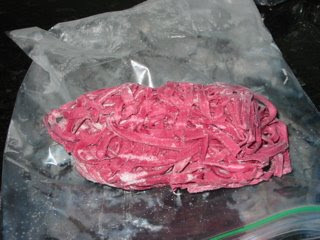 In the end, things turned out fine and I now have extra frozen fettucine at the ready. But next time I will not tackle more than I can handle at once, and I will perfect my moisture balance; one delicious handful at a time.

Lessons Learned
Making pasta should not be hard. If it is, you're doing it wrong and there is a good chance your moisture balance is off. Work in small batches while you are perfecting your technique; don't bite off more than you can chew.