Yes, Baldrick, a round of Geralds 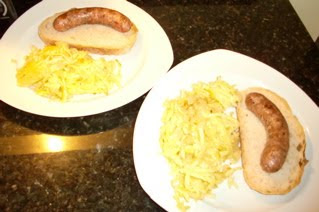 What's better than Brats and Käse Spätzle with a slice of sourdough bread? 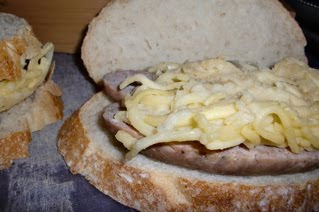 Brats and Käse Spätzle in a sandwich of sourdough bread! 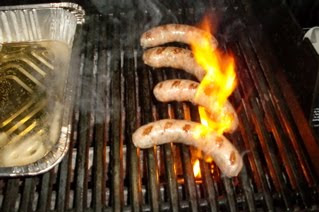 Feeling Autumnal we decided on a classic and hearty pairing. The brats had the traditional treatment of a quick sear on the grill followed by a beer steam bath, and the käse spätzle came from Cookin' with Cyndi. FULL DISCLOSURE: sourdough was store bought and so were the spätzle egg noodles. It is okay to think less of me now.

But the meal was just... okay. Even with mustard the brats were drowing in the sourdough breads dryness, and the spätzle, despite/because of being packed with emmentaler cheese was a bit greasy but didn't have enough flavor pop. Perhaps the onions weren't carmelized enough? (they weren't, but sometimes they provide a textural foil that way) Perhaps we needed a cheese mix? More salt? Pepper?

Days later while deciding what to have for dinner my wife instinctively says "Panini*." And then due to divine inspiration says "Brat and spätzle panini!" The idea was just crazy enough to work! 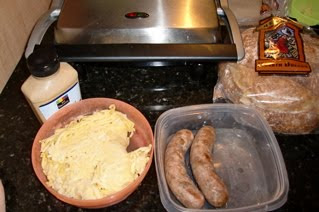 *yes that is a panini maker... feel free to think even less of me now but I really like it. I used to 'ruin' grilled cheese and this not only cures that but also makes them much faster (no flipping) and even does a solid job of grilling small amounts of delicate things (thin eggplant grilled on this never comes out oily because I don't have to worry about it sticking to the grates so I only use the slightest touch of olive oil). Sure, it *is* a hassle to clean but I'm fine with scrubbing each individual ridge with a paper towel for cleaning. If you are okay with that detailed work, a panini press might be a good choice for you. If not... skip it. 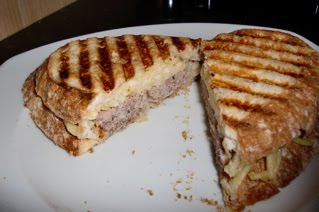 The end product, despite having exactly the same ingredients in a slightly different (and reheated) configuration was PURE GOLD. The theory is maybe the flavors melded in the fridge, the extra oil from the käse in the spätzle gets absorbed by the bread. And the onion, while still not carmelized, was shining through and bringing flavor in a big-way.

This wasn't dry, this was perfection.